When we started discussing the concept of the post-digital in late 2012, the term was already used in different areas: in music, of course, but also in an art and design context. There was, however, no wide-spread academic discourse despite a few seminal publications: Alessandro Ludovico’s book on Post-Digital Publishing (2012) and, in early 2013, Susan Hayward’s chapter on “Digital Cinema/Post-Digital Cinema” as well as an English excerpt of Rasmus Fleischer’s manifesto in “How Music Takes Place.”[1] So we still felt uncomfortable with the somewhat wobbly nature of the term’s definition at the time. 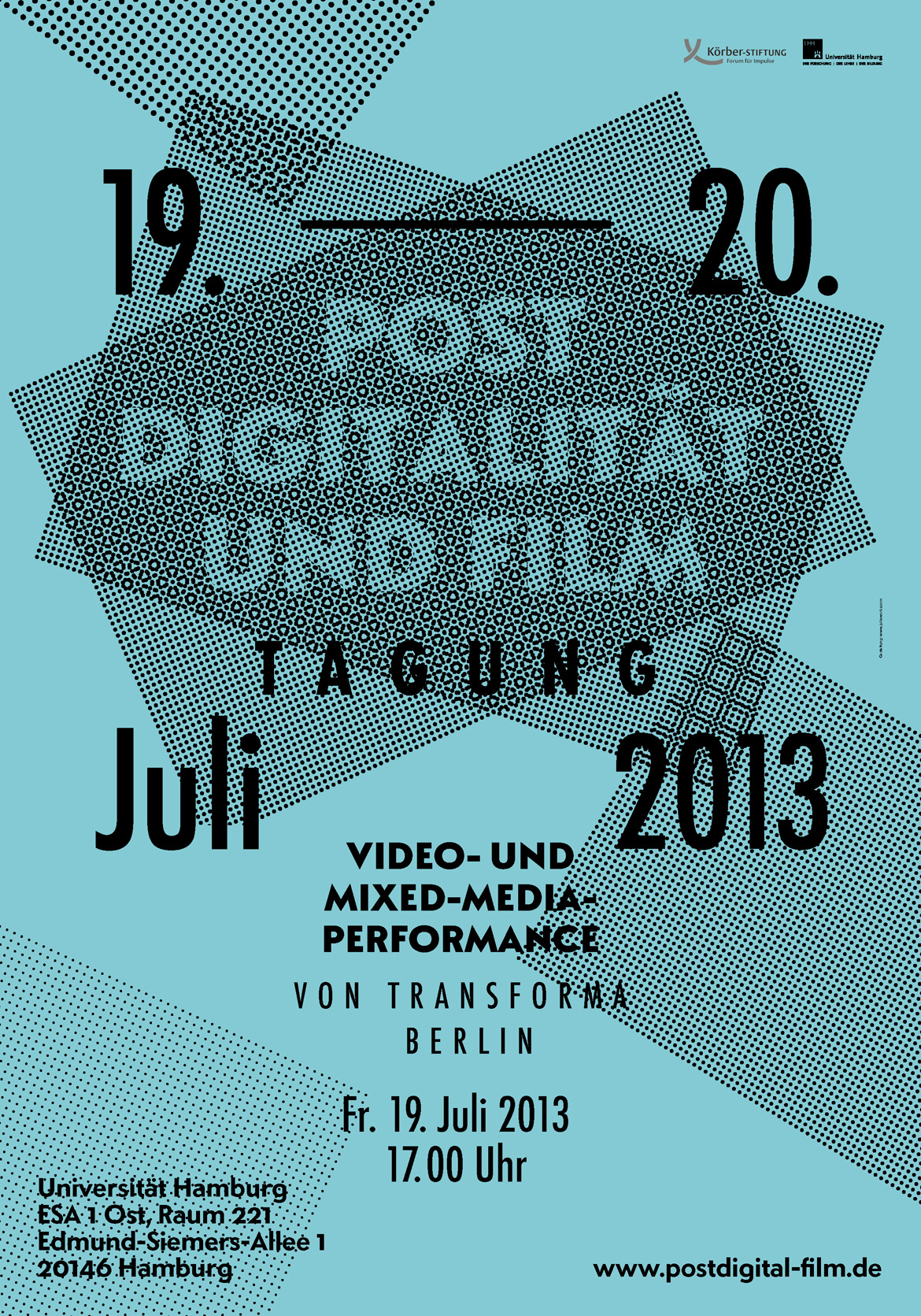 As members of the institute of film and media studies at Hamburg University, we decided to examine the concept of post-digitality in its relevance for our own field of study and, if possible, to sharpen its definition. We organized a conference on “Post-digitality and Film” in July 2013. While the conference focused on film, it was important for us to include contributions from other disciplines, such as music and art studies, as well as a non-academic contribution in form of an audiovisual performance by the artist group Transforma. Since the post-digital touches upon different areas of theoretical discourse and creative practice, it appeared more meaningful to explore it with this larger framework in mind.

At about the same time, other projects also had started to work on the concept of the post-digital: Franziska Morlok and Martin Conrads, for example, had started their project “Postdigital ist besser*” at the University of the Arts in Berlin and the “Post-Digital Research” project had taken up its work at Aarhus University in collaboration with Transmediale Berlin. Both these projects have published the results of their research,[2] and happily we can now include their seminal work on the definition of the post-digital in our own publication. Accordingly, the articles on this website already refer to a much more precise idea of the concept. These projects have also shown that, despite the fact that the term “sucks”[3] and sometimes provokes anger and spontaneous rejection, it need not necessarily be dismissed and can actually be very useful as a means to critically reflect on ideas linked to the digital domain.

As the phenomena that can be subsumed under the term post-digital are still going on around us, we have decided on a dynamic form of publication which takes the dynamic nature of the discursive field into account. We are aiming to move beyond the focus of our conference and open up the publication to contributions from all disciplines. This wider approach is also mirrored in the title for this project: Post-Digital Culture. We also decided to organize the website not in form of a closed publication, but as a publication platform that will continue to proliferate along with current developments in the field.

Post-Digital Culture has now been launched with a first set of articles—including contributions from the conference—that analyze different aspects of the post-digital in various areas, such as design, film, music video, music, and bookmaking, while they also address the concept from a theoretical and historical perspective. Some articles came to us from Vienna University, where Jana Herwig has worked on the post-digital with her students, and we would like to thank her very much for her editorial collaboration.

In the future, many more articles will hopefully be added to the platform. They can be in either English, German, or both, and we would like to extend an invitation to anybody interested in publishing an article around the concept of the post-digital to contact us. We also welcome artistic contributions and any kind of cross-disciplinary approaches.